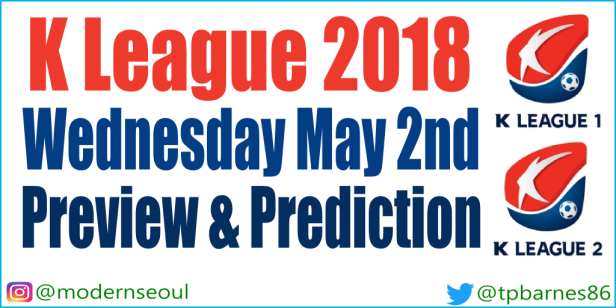 A quick turnaround as the K League 1 has yet another midweek round in order to makeup for the upcoming World Cup break. Round 11 features 6 interesting games, however the highlight game is the top vs. bottom clash between Jeonbuk Hyundai and Daegu FC. This is a big possible banana skin for Jeonbuk. Slightly briefer than normal Previews plus Predictions for all 6 games below; 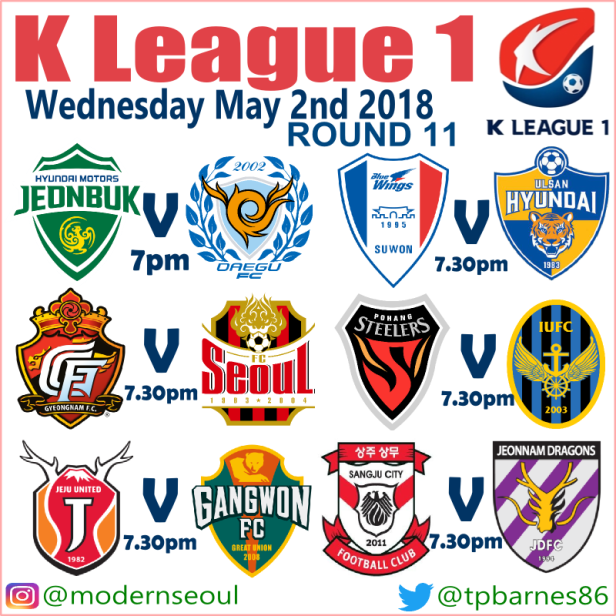 There are 6 games in the K League 1 on Wednesday Evening;

The first game of the evening features already run away leaders Jeonbuk Hyundai hosting bottom of the league Daegu. Jeonbuk have won 9 of their 10 games so far this K League season and have only conceded once in those wins. Daegu on the other hand have struggled only winning once this season and have lost 4 of their last 5 games. Obviously this is a potential banana skin for Jeonbuk, but I see them winning easily if they play like they did in previous weeks.

The first 7.30 kick features two teams that will be sick of the sight of each other soon Suwon Bluewings and Ulsan Hyundai. Suwon and Ulsan will be clash in the last 16 of the ACL, so this is the first of a trilogy. Suwon lost to Jeonbuk at the weekend 2-0, finishing the game with only 9 men. Prior to this they were winning easily and are still in 2nd. Ulsan started the season poorly losing 4 games on the bounce. However since then they’ll bounced back to win 4 and draw 2 of their last 6. They will be a close game and during to the number of games recently I see this ending in a draw.

In game three on Wednesday evening Gyeongnam FC host now managerless FC Seoul. Gyeongnam claimed a last minute win over Incheon United at the weekend, their first win in 5 games. FC Seoul sacked their boss following a poor start to the season, and a disappointing 2017. Seoul have only won twice in 2018 and a lack of a strikeforce has been the key issue, having only scored 9 goals in 10 games. Gyeongnam weren’t amazing beating Incheon, however they don’t quit and so I see them edging a poor Seoul.

In the next game features 5th placed Pohang Steelers and 11th placed Incheon United. Pohang Steelers have only 1 win in their past 5 games, but they did start the season strongly. Incheon United really struggled in April losing 5 games on the bounce, with only a draw vs. Seoul at the start of the month being the also saving grace. Incheon have also lost 3 games in the dying moments of those games highlighting a key issue. I can’t see Incheon winning this one and therefore Pohang should pick up the 3 points.

The next game comes from the holiday island of Jeju, as Jeju United host Gangwon FC. Jeju United have looked strong recently winning 4 of their last 5 games, with the 1 defeat coming against Jeonbuk Hyundai. Gangwon FC started the season well, but have only 1 win in 5 games and played out a dull 0-0 draw at the weekend vs. Pohang. I see Jeju winning this one, and it might be a classic or a dud.

The final game of the mid-week round is between Sangju Sangmu (playing their first home game of the season) and Jeonnam Dragons. Sangju Sangmu have been better than expected so far this season and sit in 6th with 4 wins from their past 5 games. Jeonnam Dragons have 4 points from their last 2 games, however have the weakest defence in the league and will be losing a bunch of players to Sangju (military service) at the end of the month so things don’t look good for them. I see Sangju edging this one, with Jeonnam looking towards the Jeolla Derby on Saturday.