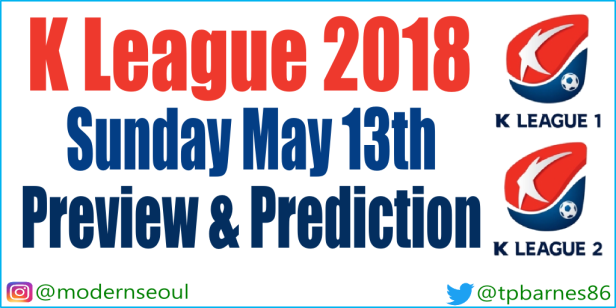 The 12th round of the 2018 K League 1 season continues on Sunday afternoon, and there are only 2 games to go until the 6-week world cup break. The highlight game of the day is between high flyers Suwon Bluewings and bottom side Daegu FC.
Previews and Predictions below;

There are 3 games in the K League 1 this Sunday;

The early Sunday afternoon kick off is between ever improving Sangju Sangmu and Managerless Incheon United. Sangju Sangmu have won 3 of their last 5 games drawing the other two and are firmly in the top half. They’re also undefeated at home this season. Incheon United parted ways with their manager towards the end of the week following a poor start to the season, with only 1 win in their opening 12 games. Incheon aren’t easily beaten, but at the moment it’s hard to bet against Sangju.

The second game of the day features 3rd placed Suwon Bluewings and bottom side Daegu FC. Suwon Bluewings are on a big run of form losing 2 and drawing 1 of their last 3 in the league and dropping the first league of the ACL round 16 to follow K League side Ulsan Hyundai during the week. Daegu have lost 5 on the bounce and seem to be a side worst affected by the heavy April schedule. Suwon on paper should have the edge here, but might rest a few players ahead of the ACL 2nd leg game on Tuesday.

The second 4 o’clock kickoff is between now top half Ulsan Hyundai and surprise package Gyeongnam FC. Ulsan picked up a valuable 1-0 win over Suwon in the ACL during the week and are unbeaten in the K League in their last 8 games. However Gyeongnam seem to be over their April slump picking up 7 points from their last 3 games. Like Suwon and Jeonbuk on Saturday I see Ulsan resting a few players with an eye on the ACL game on Tuesday. Therefore I see both sides maybe being happy to draw this one.

The K League 2 continues on Sunday afternoon and Monday evening with a handful of interesting games. The highlight game is the Sunday game between title challengers Busan I’Park and struggling Seoul E-Land. Predictions here;