We’ve reached the 1 week point of the 2018 World Cup and this is the point were dreams can certainly be broken. Wednesday evening and Thursday morning (Korea Time) sees games from both Groups A and B. The highlight game is maybe the last one of the day between Asian Giants Iran and 2010 champions Spain.

Before we start, once again here is our Wallchart for all of the group stage games with Korea Standard Kick Off Times (KST) CLICK HERE 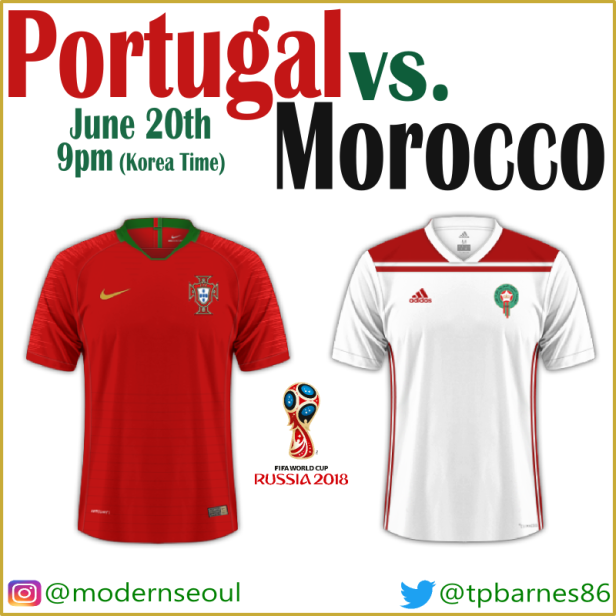 The early game of the day is between Portugal and Morocco. Portugal battled out a 3-3 in their opening game, with Ronaldo stealing the show. Morocco were solid against Iran, and unlucky not to have picked up a point. I feel Portugal will be the stronger side here, but at this world cup you just never know.

This game doesn’t look great on paper. Uruguay struggled to break down Egypt in their opening game and were maybe lucky to win. Whilst Saudi Arabia looked very poor against Russia both at the back and whilst going forward. I see Uruguay winning this one, but narrowly as Saudi will play defensively.

Group B – Thursday 3am (Korea Time)

The late game features Iran and Spain. Iran won their opening game in dramatic fashion and will be looking to continue the strong defensive style against Spain. Spain of course played out a classic against Portugal in their opening game. I see Spain having the edge here.