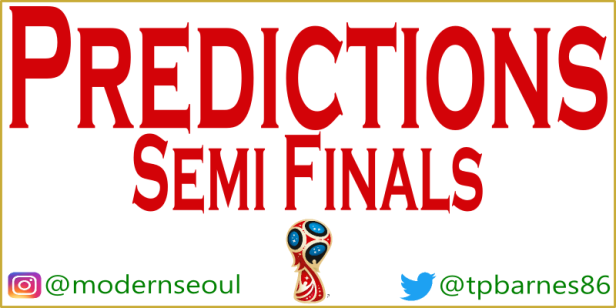 The 2018 World Cup enters its final week and it’s Semi Final time! Firstly France take on Belgium, followed by England vs. Croatia. It’s really open at this point with all 4 nations having a realistic shot at taking home the greatest prize in football.

Details on the FINAL HERE
Predictions below;

The first quarter final is between the winners from 1998 France and European Neighbors Belgium, who’ve never one the world cup before. France won their group easily, before beating Argentina in the round of 16 and then Uruguay in the Quarter Finals. Belgium also topped their group and finished with a 100% record. They beat Japan 3-2 in the round of 16, and then beat Brazil in the Quarter Finals to set up this game.
I see a close game with a lot of talent on show. Overall I see France taking the victory and place in the final.

The second Semi Final is between 1966 Champions England and surprise package Croatia, who’ve never won a major tournament before. England finished behind Belgium in the group stages. Then beat Colombia on penalties in the round of 16. They eased past Sweden in the Quarter Finals 2-0. Croatia topped their group ahead of Argentina, Nigeria and Iceland. They then required penalties to beat both Denmark (round of 16) and then hosts Russia (Quarter Finals).
Again this will be a close game, but I feel England are getting better and better. Therefore I see England edging this one, but it could go to extra time.