The K League 1 (previously known as the K League Classic) season this year was surprising both at the top and the bottom. Here are the key fact and figures, best and worst teams, players and more;

Jeonbuk Hyundai eased to yet another title, finishing the season 21 points ahead of surprise package Gyeongnam FC in second. Ulsan Hyundai picked up the final ACL place in third. Pohang, Jeju and Suwon Bluewings complete the top half.
At the bottom Jeonnam Dragons had a year to forget and will play in the K League 2 next season. FC Seoul won the relegation playoff, but were poor all year finishing 11th. Sangju Sangmu and Incheon United were just ahead of them. Finally Daegu FC and Gangwon FC were safe up in 7th and 8th.

Taking a FM (Football Manager) approach here are the sides that had strong seasons and seasons to forget.

Gyeongnam FC at the beginning of the season were expected to avoid relegation but still finish in the bottom half. However a surprise season ended with them in second place booking a fantastic spot in the Champions League next season.

Also Daegu FC in the league were pretty good, but had a fantastic cup run and so have a ACL campaign plus a new stadium to look forward to next season.

FC Seoul had an awful season, they went from the Champions League and title battles, to narrowly avoiding relegation via the playoffs. They were disappointing both on and off the pitch this year.

Also Sangju Sangmu, another poor season and record low attendances. Must do better.

There were a number of players who had strong 2018 seasons up in the K League 1. Brazilian striker Marcão had a wonderful season for surprise package Gyeongnam FC building on an excellent debut season last year in the K League 2. He’ll probably move over to China in the Spring, but maybe he’ll stay in Korea. A couple of players have wonderful debut seasons in the K League with Serbian Giant Uroš Đerić and Montenegrin International Stefan Mugoša, providing vital goals for Gangwon FC and Incheon United respectively. Also shout-outs go to Júnior Negrão (Ulsan), Cesinha (Daegu), Elías Aguilar and Moon Seon-Min (both Incheon). Finally Lee Dong-gook is still scoring for fun, he won’t retire anytime soon.

Again taking a FM (Football Manager) approach here are our best and worst signing of the season.

Best Signings of the Season;

Montenegrin International Stefan Mugoša joined Incheon United from Sheriff Tiraspol in the Spring, and scored for fun for the struggling side helping them avoid relegation.

Another Incheon United spring signing to take the K League by storm with Costa Rica International Elías Aguilar. He proved much needed creativity in midfield.

Finally former FC Seoul hero Dejan Damjanović joined Suwon Bluewings in a shock move before the season, and proved important in both the ACL as well as the league.

Worse Signings of the Season;

Sticking with Suwon Bluewings but this time for the wrong reasons; Brazilian Cristovam never settled in Suwon and didn’t play much beyond March. He moved to Bucheon 1995 in the Summer, not wasn’t much better there.

FC Seoul had an awful season and Serbian Bojan Matić the replacement for Dejan never could find his scoring boots in the capital with just 1 goal in 9 games.

Finally Ha Tae-Goon was given the number 9 shirt down for Jeonnam Dragons but failed to score in 8 games and didn’t play following the summer break. 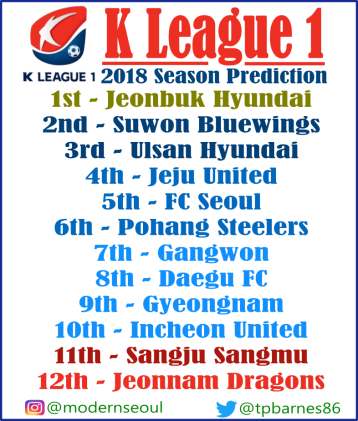 The pre-season prediction wasn’t a mile off, Jeonbuk were champions and Jeonnam finished bottom. FC Seoul were the biggest disappointment, whilst Gyeongnam FC were the biggest shock. Suwon had a poor league season, but did have a strong run in the ACL. The rest were pretty close.

Firstly we hope that someone provides competition for Jeonbuk Hyundai in the title race, otherwise they’ll run away with another championship.

It’s nice to see Seongnam FC back in the top tier after a few seasons down in K League 2. It’s a shame Busan I’Park couldn’t join them.

Finally we hope that just like in our K League 2 review that poorly supported sides from this past season Sangju Sangmu and Gangwon FC for example, hire some marketing staff and get more bums on seats. Sangju recorded a record low of just 290 the penultimate weekend of the season. It would been better to play the game at a natural venue in a non-K League city.