The K League 2 (previously known as the K League Challenge) season this year was interesting both on and off the field. Here are the key fact and figures, best and worst teams, players and more; 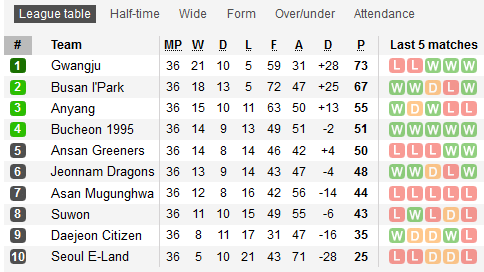 Gwangju FC topped the league with a six point lead over Busan I’Park in second. FC Anyang and Bucheon 1995 completed the playoffs, with Ansan Greeners narrowly missing out. Jeonnam Dragons, Asan Mugunghwa and Suwon FC were a little behind. Finally Daejeon Citizen and Seoul E-Land rounded off the final K League 2 table of the decade.

Taking a FM (Football Manager) approach here are the sides that had strong seasons and seasons to forget.

Gwangju FC; most people expected them to be around the bottom of the playoff picture, but they had a great season and took the title at a canter in the end. They might find life back in the top flight tricky, but playing in a smaller more football friendly stadium might help, just look at Daegu FC.

Daejeon Citizen were off the pace once again and looked to be missing any key players for much of the season. Thankful for them they’ve been taken over by Hana Bank which should see a change in fortunes.

There were a number of players who had strong 2019 Seasons. Brazilian Felipe was a big reason for Gwangju’s championship success. Egbuchunam helped Suwon FC finish as least mid-table in the end. FC Anyang duo Cho Kyu-Sung and Alex pushed their side into an unlikely playoff spot. Plus also Lee Jeong-hyeop, Lee Dong-Jun, Romulo and Soma Novothny helped Busan I’Park finally escape the second tier and return to K League 1 for the 2020 season.

Again taking a FM (Football Manager) approach here are our best and worst signing of the season.

Best Signings of the Season;

Chisom Egbuchunam (Suwon FC) scored for fun despite playing for a mid-table strugglers Suwon. The Nigerian came in with a solid record in Sweden and built on it in Suwon. Sadly for Suwon he’s moved on to play in China.

Finally a shout out to Marlon de Jesús of Bucheon 1995, ten goals is a solid return in a debut season.

Worse Signing of the Season;

This year I’m going with a coach, Fabiano honestly never really got going in charge of Jeonnam Dragons. Sadly they only got going once he left and by that point it was a little too late.

The pre-season prediction wasn’t great this season, of course I didn’t see Gwangju FC even challenging for the title let alone win it. But Busan I’Park won promotion via the playoff so I got that right. Asan, Daejeon and Suwon all final to meet pre-season expectations. As did Jeonnam, but Bucheon and FC Anyang surpassed theirs. Ansan Greeners were excellent, whilst sadly Seoul E-Land were as expected a little off the pace of the rest of the league. 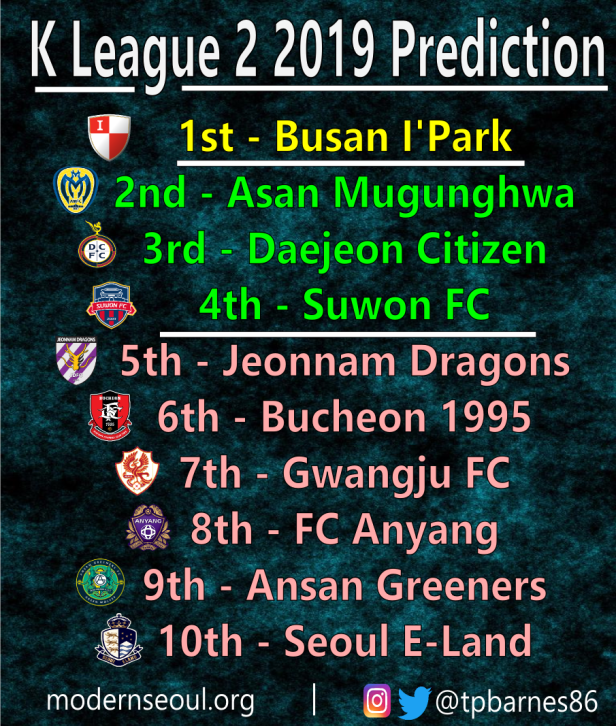