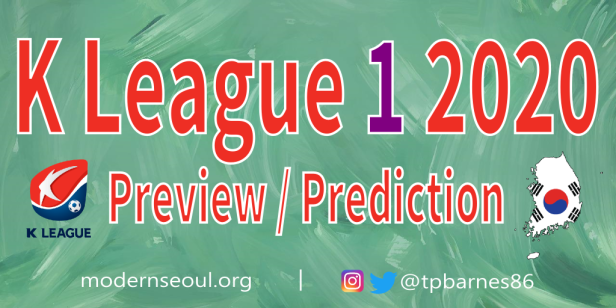 There are just a couple of weeks to go until the start of the K League 1 season, this season seems like it will be once again who can challenge Jeonbuk Hyundai? With Ulsan Hyundai being their main competition on paper. The relegation however seems more open with no obvious gap between midtable sides and the bottom few from last season.

So here is my prediction and a brief preview for the 2020 K League 1 season (note this is my personal prediction); Starting at the top I once again feel that Jeonbuk Hyundai are going to be the ones to beat this season and favorites for the title. Close behind them I think it will be Ulsan Hyundai. FC Seoul, Suwon Bluewings and Pohang Steelers could be in the mix in the top half battling for the title and the ACL spots. With maybe Daegu FC just making the top half this year.

Moving to the bottom I believe it could be a long hard season for Seongnam FC, and they might suffer relegation. Gwangju FC could also find life hard up in the top tier, especially as their new stadium has been delay until at least the Summer (maybe even next season). Just above the relegation zone could be Sangju Sangmu, Busan I’Park and Gangwon FC. With Incheon United the best of the bottom half sides this coming season.

Overall I feel that the relegation battle might be more interesting than the title race especially if Jeonbuk run away with another title. But it’s still early days and of course anything at this point could happen. Attendances will be down at the start of the season due to national virus worries, but fingers crossed fans return during the summer to cheer their local sides on.

Finally these are the fixtures for the opening weekend of the 2020 K League 1 season. Please note two games have been postponed due to virus fears Daegu v Gangwon & Pohang v Busan.

The K League Super Cup (of sorts) is the highlight game on the opening day of the 2020 season with defending champions Jeonbuk Hyundai hosting FA Cup winners Suwon Bluewings. On the Sunday the game between Incheon vs. Sangju maybe a dark horse for game of the weekend. 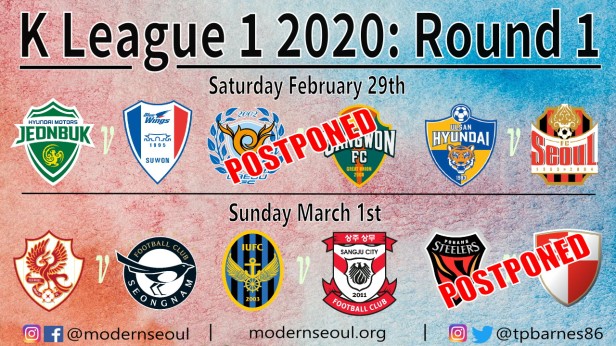 Do you agree or disagree?

I will try my best to keep things updated throughout the 2019 K League via Twitter (and little via Facebook).